“You are so lazy! Why don’t you get a life!”  These words I heard belching from my mouth at my son. Ignorance can call you to say things you might regret.

I’ve spent 3 decades in sports - over 80,000 hours of gymnastics, 7 world titles in Arm Wrestling, and coached everything from our kid’s soccer games to recreational gymnastics to 8 years as a PE coach in a private school. How could it be that my son, Austin, would - instead of kicking a perfectly passed soccer ball to make a goal – raise a pointer finger at the soccer ball, and pretend he was shooting at it? How could it be that my son would opt for “wheelies” long after they were a fad?

The truth is, we simply didn’t see the signs. The dip in the chest, awkward gait, almond eyes, crowded teeth (He hated wearing his retainer and would conveniently leave it places). We didn’t notice grades, starting out A’s would slowly drop because (we didn’t know then) sitting in the chairs hurt his back and hips…

Austin decided he wanted to drop out of school in his 12th grade to work. He got a job at Albertsons as a bagger and was their best worker. One night he came home early. “Why are you home so early?” I asked. “They sent me home early because they saw I was only using one arm. The other one wasn’t working and was numb and blue.”

“Oh”, said one doc, “Raynaud’s disease (which causes some areas of your body to feel cold and numb).” But that didn’t explain the shoulder and hip pain and fatigue and headaches….Thus started a year of doctor hopping and we also were taking a stab at different guesses. Each week we would come up with a different answer.  All the time this was going on, we were all dealing with our own thoughts. I was feeling frustrated, confused, and exasperated by the medical system.

We, like hundreds out there, were denied SSDI (Social SecurityDisability Insurance), SSI (Supplemental Security Income) and every other option for assistance…

Austin had a champion attitude and surrendered. I weep as I write this – He said gently, “Mom, some people see God only in the good times. Some people see God in the trial. I see God in the trial, mom.”  One night, late, like 3:00 am, I just couldn’t’ sleep. “Lord,” I pleaded, “Please guide our family! Bring knowledge, wisdom, understanding, peace, kindness!” I started searching the internet – and this was one of the few times the internet seemed to pave the way for us. Surrendered and completely at the end of myself, I typed in things….symptoms, throwing out non-possibilities, jotting down rare things, using a funky bell curve system – as only a mother could.

And there it was. Staring at me. MARFAN SYNDROME. I sat there weirdly numb. Like someone had spoken important news to me, only it was in a different language. I sat for another half hour, reading the word over and over again. Saying it quietly as if to try it on. What would this mean? “Sleep on it.” I thought, “We can think fresh in the morning.”

“I think you have Marfans”.

I explained it to the family and to Austin. A barrage of questions and opinions levelled at everyone.

Like putting the last corner of the puzzle together, we saw the pieces fall in place. It started to all make sense. We all went through different stages of denial, grief, anger, acceptance, empathy. I personally had to get over all the guilt for treating Austin with such impatience. I apologized often. “Mom” he finally said, “You are fine! You don’t need to keep apologizing.”  Then we slowly learned to communicate around it. “How do you feel today, Austin?” We have plans for Sunday, if you are up to it that day, will you go with us?”

Last year, my husband was asked to be in the reality show Game of Arms. The producer showed up to film our family. He took one look at Austin and said, “Please tell me about your situation.” Austin was featured on the show and the moment it aired on AMC, there were people contacting us. “How is Austin? We love him!” The producers flew him to Sacramento to be filmed. The journey is just beginning.

Allen and I have a radio show Arming Champions Radio that airs the first Monday of the month. We feature athletes that give back to the community in a special way. Austin interviewed his dad! So very special.

Today we are discovering new ways to be involved. Last month I found out that Team Victory was representing at the Long Beach Marathon. “I want to run the half marathon!” I blurted. And so I did. I want to bring awareness and find ways to help those with Marfan Syndrome. I want to help the siblings the parents of those with Marfan’s.

Carolyn Fisher is a mother and a world class athlete residing in Spring Valley, CA. Her son, Austin, was diagnosed with Marfan syndrome at 18 years of age. 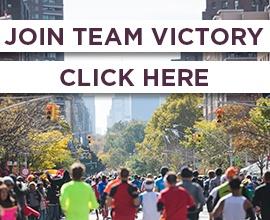