Advocacy in Action: My Experience Lobbying for The Marfan Foundation on Capitol Hill

As someone with a pre-existing condition, this issue hits very close to home. I have Marfan syndrome, a connective tissue disorder that primarily affects the heart, eyes, and skeletal system. An especially dangerous effect of this condition is the enlargement of the aorta which requires timely medical intervention. As with any condition, Marfan incurs various costs ranging from everyday medicine to complex surgeries, such as my spinal fusion. For me and many other people within the Marfan and related conditions community, it is necessary that these expenses are covered because, if not, it would be near impossible to pay for everything. 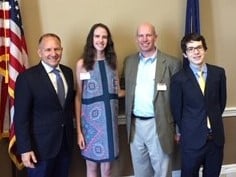 That summer, I was invited, along with other delegates from The Marfan Foundation, to participate in the Capitol Hill Advocacy Day for the continued protection of pre-existing conditions. The Marfan Foundation pursues innovative research and makes sure that it receives proper funding so that more people with Marfan syndrome or a related condition can receive a diagnosis, get necessary treatment, and live a long and full life. Our charge was to ask the representatives to support the budget of the National Institutes of Health, join the Rare Disease Caucus, and allow the community to review the replacement plan before repealing the Affordable Care Act.

The night before we met with the staffers, congressmen, and senators, we attended a training session at the historic Monocle Restaurant to learn more about the specifics of the legislative issues surrounding coverage for pre-existing conditions, the logistics of lobbying, and how to make our congressional visit successful. This was also where we met with our teams, the groups in which we would be lobbying. Given that my dad and I were the only representatives from Pennsylvania, we were paired with Michael Weamer, who is a resident of Connecticut and is the President and CEO of the Foundation.

We began the day with a brief meeting at the Health and Medicine Counsel of Washington, the firm that The Marfan Foundation works in DC; they advocate and lobby for companies and groups related to medical issues. After this, we took a group picture on the steps of the U.S. Capitol building. I was thrilled to be in this monumental place in D.C. where history is literally made. 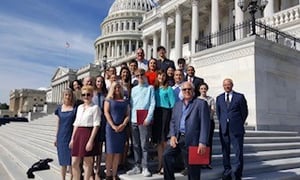 Each team then made its way to their respective state senators’ and representatives’ offices. Our team met with staffers for senators such as Bob Casey and Pat Toomey, and we had the opportunity to speak directly with Lloyd Smucker. When we talked to each congressman and staffer, we first introduced ourselves and talked about our local connections to the community.

I began by speaking about my journey with Marfan, specifically my personal experience undergoing surgery. This was especially important because congressmen need to put a face to their constituents and their issues. The laws that they vote on seem very abstract without evidence of how they can have a real life impact on individuals. We then spoke about the Foundation’s goals and provided them with leave-behind materials that emphasized these objectives.

Since that Advocacy Day in 2017, which took place during the first few months of President Trump’s term in office, many senators have proposed bills that attempt to replicate the protections implemented by the Affordable Care Act; however, none of them offer the same breadth of coverage.

As a high-schooler, it can seem as though my opinion gets lost in the shuffle; however, this experience showed me that if we take initiative we can impact issues directly pertaining to us and future generations.

The Foundation’s 2019 Hill Day is March 13. If you would like to participate, please email publicity@marfan.org. Be sure to include your postal address so we can coordinate meetings with your local representatives.

Please note that travel reimbursement is unavailable for this event.

Sinclaire Schuetze is a 15-year-old sophomore at Hempfield High School in Lancaster, PA. She plays piano and cello and dances with the Lancaster Liederkranz German folk dancing Kindergruppe. She is the editor of her school newspaper and is active in the Anchor Club and Key Club, which are community service clubs in her school.