Eight years ago we had our first child. I knew the risks and I diligently followed the orders of my obstetrician and my husband's cardiologist. I gave birth to a beautiful baby boy and he was healthy as can be. He was monitored by a cardiologist for two years with no signs or symptoms of Marfan syndrome. We loved being parents and decided to add to our family. We were blessed with a beautiful baby girl! Things couldn't have been more wonderful.

I brought Emily to the cardiologist at 3 weeks old for her first evaluation. I had put Marfan syndrome in the back of my mind for so long that it was only a fleeting thought at this point in my life. Although I knew that any of our children would have a fifty percent chance of inheriting this condition, our son had shown no signs and I naturally assumed Emily would be the same. 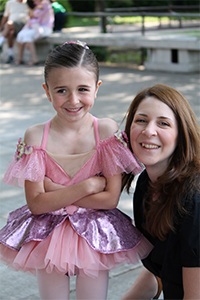 As the years went on, Mike's health began to deteriorate and we went to doctor after doctor trying to understand what it was. I worried quietly. In 2012, we attended our first Marfan Foundation family conference. This was a major turning point in our lives. We met so many amazing people and saw some amazing doctors. We learned that what we thought was status quo in terms of Mike's health was in fact not. Within four months of the conference, my husband had open heart surgery and shortly afterwards had two spinal surgeries. I could no longer hide from reality. I was now face to face with this condition and I was scared to death. He had these surgeries in the course of one year. I cried all the time, I wanted to take all the pain away from him and I worried quietly about Emily having to go through the same. My husband is still recovering and we take one day at a time.At this point in our life, my husband's health was stable and the dilation of his aortic root was unchanged for several years. Even though Emily had some of the physical characteristics of Marfan syndrome, I had convinced myself that she did not have the condition so much so that I brought Emily to the cardiologist alone that day. My husband was home taking care of our son. In my mind this was just a routine follow up. I will never forget this day. The cardiologist looked down at the results of the echocardiogram and turned to me.  She said, "Mrs. Kramer I think you already know." At three weeks old, Emily's aortic root was already slightly dilated. My heart was broken and I was brought immediately to tears. I don't remember much else about that day....I cried all the way home. I wanted to get it all out before I got home so that my husband wouldn't see how scared I was. I wanted to be brave and strong.

I can't cry anymore, but I can speak up. I can talk about Marfan syndrome and I can help raise awareness and money in hopes that Mike and Emily along with all those out there with this condition will have a better life. This year we are participating in the Walk for Victory. We don't have any surgeries in the near future and we have an opportunity to get together with others in our community and let them know about Marfan syndrome. We are supporters of The Marfan Foundation and are thankful for the tireless ways in which they pursue a cure. We look forward to the annual conference and continue to use the website as our go to resource for up-to-date information on research and general day-to-day problems.